Have you ever wondered how Bittium has become a prominent global player in software defined tactical communications and networking? And how we work towards the future? In order to understand what led us here and what we are dedicated to achieve, we need to start by taking a look back.

It Started with a Vision

As you might already know, Bittium (then Elektrobit) was founded in 1985, and not too long after that the Finnish Defence Forces already started to comprehend that the nature of the battlespace was going to change in the future and the existing communication systems would not meet the requirements. Eventually it was understood that defense forces in Finland and globally would be able to operate more quickly and effectively if their lower number of troops would be more dispersed and mobile and with added firepower. This change in the doctrine would be enabled only by more advanced, real-time and accurate situational awareness and leading the troops on-the-move. Software Defined Radio (SDR) was seen as the perfect platform for the future battlefield radio systems and networks. It could offer, among other things, efficiency for wireless communications in network centric warfare and also interoperability nationally and internationally. This realization led to the start of the Finnish Software Radio Programme (FSRP).

The courage for a small country like Finland to start their own programme was at least partially thanks to the success of our telecommunications industry and the related scientific research community. This is where Bittium came into the picture and joined the programme. By then we had already been working with commercial telecommunication technologies for many years and we had also worked in cooperation with the Finnish Defence Forces in research and development projects. University of Oulu, our neighbor here in the Silicon Valley of Europe, had been the leading academic partner in the spread spectrum research. Similarly, the University's Centre for Wireless Communications (CWC) also joined the FSRP programme. What started as a research programme was followed by the Bittium-led consortium building an SDR demonstrator and a prototype. The demonstrator was a cupboard-size rack of computers that now feels like a distant past already. The ambitious and successful programme gained a lot of interest internationally and led to Finland joining also a European SDR programme, European Secure Software-defined Radio (ESSOR). Thanks to our expertise, Bittium was selected as one of the National Champions in the programme to develop pan-European SDR architecture and waveform in order to improve the ability of armed forces to cooperate in coalition operations. 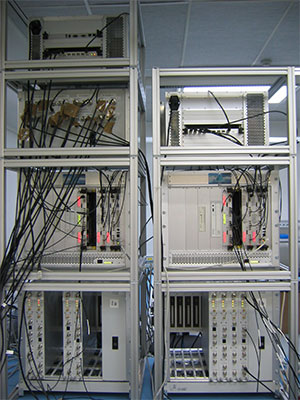 Software Defined Dreams Made Into Reality

We have come far since the days of the Finnish SDR programme. After a lot of research and technology demonstrations, the Finnish Defence Forces procured a software defined radio based system Bittium Tactical Wireless IP Network, or TAC WIN in short, that is now being used by all three branches of the Finnish Defence Forces. The TAC WIN system acts as an resilient, mobile, broadband IP backbone network for data transfer and helps to maintain command and control, situational awareness as well as information security in increasingly mobile combat scenarios. And the Finnish Defence Forces is not the only defense forces that have chosen the TAC WIN system for their path to modernizing tactical communications. We have accompanied our SDR offering also with next-generation tactical radios, Bittium Tough SDR Handheld and Vehicular, that are now also being delivered to the Finnish and global markets to extend the TAC WIN network also to lower echelons of the battlefield. We can proudly say that what we have achieved so far is a success story based especially on versatile technological expertise and understanding, visionary ideas, co-development with the end users and long-lasting partnerships.

But what challenges are we and our customers tackling in the future? We see that complexity with networks will increase as there will be more and more heterogeneous networks and waveforms, and tactical networks will be complemented with mobile networks. Radio spectrum is a scarce resource and frequency allocation has to become more dynamic to balance the commercial demand and military needs, and that sets special requirements. Autonomous and unmanned systems and hybrid networking are also strongly developing areas and will set new requirements for data transfer. Last but not least, electronic warfare and cyber threats will evolve continuously. We believe that these challenges can be tackled with performance optimization through technologies such as software defined networking and artificial intelligence. And this is not just a future scenario. Take for example the iMUGS (integrated Modular Unmanned Ground System) project that is operating under the European Defence Industrial Development Programme (EDIDP) to develop new capabilities for European defence forces based on autonomous systems.

Harri Romppainen has over 20 years of professional experience in wireless systems and tactical communications. After joining Bittium in 1998, he has held several positions in R&D, sales and product management. He is passionate about tactical communications and Software Defined Radio (SDR) based systems, capabilities and business. He is currently responsible for business management in Defense and Security product and service area at Bittium.